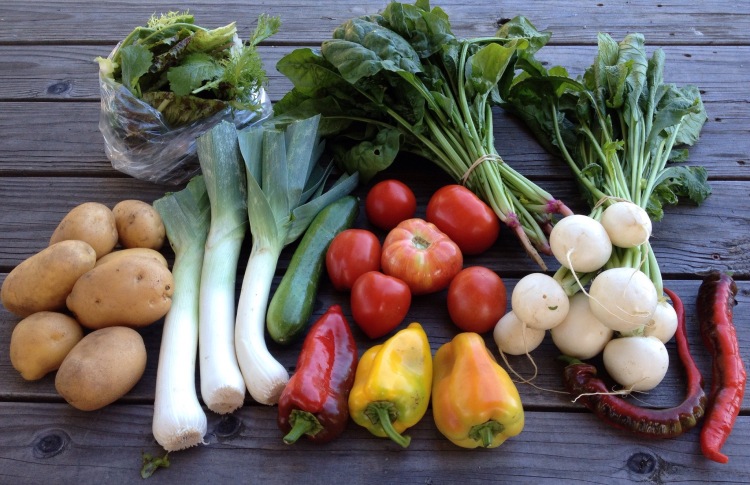 Yep a little bit of summer in the fall is what we’ve got in the weather and in the share this week.  Summer peppers, tomatoes and cucumbers sit alongside fall leeks, potatoes, hakurei salad turnips, spinach, and salad mix.  That pretty much sums it up…  I think leek and potato soup is on the menu this week.  Perhaps the fall soup cooking will help bring on the fall rains, which I could use to help germinate all the cover crop seed I’ve been spreading around the fields.

1) Melt butter in a large saucepan over medium heat then add onions and leeks. Cook, stirring, until onions are limp and just slightly brown.

2) Add sliced potatoes to saucepan then pour in enough chicken broth to just barely cover the potatoes. Continue cooking over medium heat until potatoes are tender. Using a potato masher, mash and stir potatoes until desired consistency is reached. As you mash the potatoes and the soup thickens, turn down heat and stir frequently with a large spoon to prevent scorching on the bottom.

3) Add one cup of heavy cream (or more if you desire) and salt and black pepper to taste. Cook 15 minutes more over low heat, stirring frequently, then remove from heat and serve.

Notes: *Make sure to clean leeks thoroughly and slice only the white and light green part of the leeks. **You don’t need to peel the potatoes as the peels add to the rustic texture of the soup. But make sure to scrub them thoroughly and remove any obvious blemishes before slicing. Although we always make it with chicken broth, this can easily become a vegetarian soup by simply using vegetable broth instead.